You are here:Home Uncategorized The Power in a Name

The Power in a Name 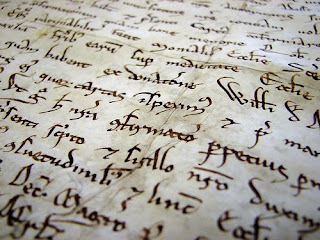 Ancient myths of East and West tell of a power held in one’s name: to know someone’s (usually a god or some spirit’s) name was to hold power over it. This idea has been used beautifully in the modern works of fantasy novelist Ursula K Le Guin, as well as animator Hayao Miyazaki.

Think about your own name for a second: it’s so powerful that your brain can hear someone saying your name across a crowded room. Ever since you were born, people around you have been using it to name and define you: “Look at what Johnny did! What a smart boy you are,” an adoring parent might say, thereby helping the child to link his name (Johnny) with an attribute (smart.)

How powerful is it when a father sincerely tells a young daughter “Jane, baby, I love you” every day, thereby creating a lasting impression of her name linked with the reception of caring and tenderness from an omnipotent being (which all parents are to a young child)? Then the child’s name becomes a blessing that could potentially last a lifetime.

And then there are unfortunate incidents of judgments and condemnation passed onto us through our name (“Look at what Johnny did! Why do you have to make a mess of everything?” etc) whether from parents, siblings or other children. In severe cases where criticism and shaming becomes the daily ritual, the child’s name can actually become a curse that lasts a long time.

Your Name Holds Feelings You Have About Yourself

All these emotions – some uplifting, some devastating – are stored into a single focal point – your name. Say your full name out loud, and you can feel the emotions contained within this powerful symbol – do you feel proud and confident, or insecure and even ashamed?

This is why it’s so important to take good care of other people’s names. We cherish the sound of our name being spoken with love, by those closest to us. We also feel the pain upon hearing our name being used in a blaming, critical or belittling way. And then there is the case of no one calling our name, ever – what happens then? We become invisible – there is no “me” – that’s what abandonment feels like, and the name stores that emotion too.

The Custom of Child Name and Adult Name

In some old cultures like ancient Japan or native American culture, you were given a child-name at birth, then later received your adult name when you were old enough. I think this was a very effective custom designed to help each person discard the childish identity attached to his/her name (along with any sense of insecurity and powerlessness attached to it), and become a strong adult who is part of the community.

Somehow I’m inclined to think there was less of what we today call a “Peter Pan syndrome” in those cultures…Probably there was no blaming the boss (parents), no victim behaviors. All of that was discarded with the child name.

The moral of the story is not so much to change your name literally in a new age way, but to realize that you can choose to adopt a different, altogether more empowering identity if you like. As an adult, you’re free to shape your own identity!

Taking Care Of Your Name – and Other People’s Names.

Remember to use your name in conjunction with uplifting phrases – treat your name as sacred, because it is. While you’re at it, treat other people’s names the same way – never use them without attaching it to some positive emotions.

The myth is real – by knowing someone’s name, you hold power over them – the power to speak blessing or curse into their life, potentially lasting a long, long time. Great leaders (including good parents) know about this power, and they take care of people’s names well.

Feelings Stored in Other People’s Names

If our own name contains a lot of emotions, what about the names of those closest to you? Say your mother’s name, for instance. What emotions does it bring up in your mind? For some it is an emotion of love, or loyalty that comes up. For others it is loneliness and grief. Another might feel a tinge of depression, if the mother was depressed. For yet another it may be a cold detachment with no emotions.

This is a powerful way to experience the mother complex (or mother archetype) within you. As we all know mother is represented by the Moon, and depending on its placement, you may have a benevolent and caring mother complex, or a hard and critical one.

The important thing about mother complex (or the Moon) is that it defines the way you relate to yourself and your loved ones. Saying your mother’s name, and experience the various emotions associated with it, is a quick way to “feel” your natal Moon.

Names Linked to Planets in Your Natal Chart

Names, in general, are ruled by Mercury, as he is the giver of symbols. This means the condition of natal Mercury tends to represent the way in which you perceive everyone, including yourself.

Your name can be represented by the Sun and the Ascendant. Your social and professional status (i.e. Dr. so-and-so, or Mr. Smith, C.E.O.) is governed by the Midheaven. Hence when there is a major transit or progression to the Sun or the Angles, we potentially add a new meaning to our name (“I didn’t realize, but I was meant to be a Teacher” or “I’m realizing what a successful person I’m becoming” or “I married and literally changed my last name.”) So the self concept shifts, and new meanings are linked “Joe the Teacher”, or “Successful Mary” or “Mrs Smith, happily married,” etc.

Mother and her name is symbolized by the Moon, as discussed above.

Father is symbolized by Saturn (and some say the Sun.) What comes up when you say his name? Does it bring up the emotion of approval or disapproval, and will that affect how you relate to your boss (whose name is also represented by Saturn)?

Your lover will be represented by Mars (if you’re a female) or Venus (if you’re male), and the 5th house (sex and romance.) Say his/her name and feel what kinds of emotions are triggered.

In addition, your long term partner and closest friends will be represented by the 7th house. Male partner will also be represented by the Sun, female partner by the Moon. So in a committed relationship, our mother/father complexes are inevitably brought up – as unfair as it may be, we tend to fuse the names of our spouse with that of our parent unconsciously.

Your teacher and mentor (and I suspect the grandparents and other benevolent relatives) will be represented by Jupiter. Say their names and you’ll see how your Jupiter is doing.

Outer Planets get a little more distant (unless it is closely tied to the inner planets, of course.) Uranus represents the names of your friends that are progressive or rebellious. Neptune may be the names of your healer, spiritual friends, or movie stars that you idealize. Pluto has various associations, the most accessible of which is the psychotherapist and people that help you see the deeper side of things (I hope you don’t have any criminal friends – on the other hand, you may have powerful friends in high places.)

In Closing: Clearing a Name

This name-feeling association exercise is one way to become aware of the emotional baggage you may have been carrying all along. If some of the names bring up negative emotions of hurt, shame or criticism, it is time to clear that name – as it is showing you where your pain is stored.