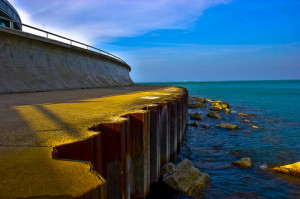 Neptune represents dissolution of boundaries, which can manifest in a thousand different ways.  Here we’ll explore the interpretation of natal or transiting Neptune aspects.

Neptune – Sun aspect: Sun represents the sense of self, so a strong contact from Neptune threatens to melt down the boundaries of the ego.  In a best case this can heighten intuition or a sense of inspiration (accessing the previously unknown psychic resource).  In other cases there may be a possibility of confusion (losing the framework of where one stands) or deception (suppression of authenticity).

Neptune – Moon aspect: Often a special sensitivity is added to emotional needs.  There could be refinement through aesthetic pursuits or spiritual studies.  There could be a strong awareness of one’s own subconscious that manifests in the form of dreams or imagination.  Being grounded becomes key.

Neptune – Venus aspect: When boundaries melt away in love, often a strong romantic tendency results.  There could be a tendency to lose oneself in love (resulting in confusion), or potential for extending love to a great number of people (resulting in compassion).  Aesthetic sensitivity could be heightened dramatically.

Neptune – Mars aspect: Mars represents our methods of action. When Neptune dissolves the boundary of Mars’ procedures, an imaginative quality enters all of our actions.  Because Mars is most often associated with action, this combination has potential for inspired, visionary action.  When not grounded, vision and imagination could overwhelm and paralyze the decision-making process, resulting in loss of focus.

Neptune – Jupiter aspect: When boundaries disappear in Jupiter’s higher mental pursuits, there is no stopping the enthusiasm.  There could be grand idealism with a spiritual or philosophical bent.  Lofty philanthropic vision may require a focus of action to bring it down to earth.  If the primary focus is on having fun, extreme self-indulgence could result.

Neptune – Saturn aspect: Saturn builds order and structure in life.  When Saturn’s boundaries are dissolved, you could feel a real loss of control that may even lead to depression.  Ambition could go to sleep as you question the meaning of working so hard.  After a deep contemplation, you may emerge with a less rigid sense of goals and inspired long range plans.

Neptune – Uranus aspect: Uranus intensifies the individuation process.  When boundaries dissolve in the course of self-realization, intense creativity or spiritual sensitivity could awaken.  In a less developed ego, Neptune’s effect could result in a blurry self-image and questionable independence.

Neptune – Pluto aspect: Pluto represents the dark, primal part of our subconscious.  When Pluto’s boundaries are dissolved, our consciousness opens up to a deep and powerful undercurrent of psychic energy.  There may be unusual, supernatural experiences or sensitivities.  Interest in the occult or other realities may emerge.

Neptune represents our mind at its vastest, unbounded state.  When Neptune archetype is activated, the concept of time often ceases, and ego awareness fades into the background.  Through such experience, we expand our self-awareness and become more present to all aspects of our being.

All Neptune aspects could be viewed as contacts with the unbounded sea of impressions within your subconscious.  Learning to recognize and direct Neptune’s inspirational energies can dramatically enrich your day-to-day experience.