You are here:Home Astrological Planets Moon and Memory: Emotions You Tend to Remember

Moon and Memory: Emotions You Tend to Remember 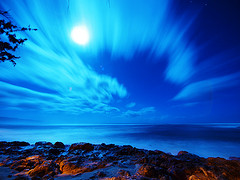 Moon symbolizes your emotional needs as well as memory.  Our Moon (i.e. the parts of our brain responsible for storing emotional impressions) stores all emotional experiences such as love, joy, sadness or anger, over the course of our lifetime.

Natal Moon and Your Memory

The strongly felt & frequently repeated emotions tend to become “hard wired” in our brain.  A series of joyful experience repeated over time will create a hopeful, enthusiastic Moon that responds to life with hopeful, enthusiastic attitude.  Likewise, a series of sad experiences during childhood may create a despondent, insecure Moon that responds to life with fear and anxiety.

Moon’s Aspect with Other Planets

Each astrological symbol represents a flavor of emotional experience.  A planet strongly aspecting your Moon (especially via conjunction, square or opposition)  would impact your emotional patterns.

Here are some positive and negative manifestations of Moon’s aspect with other planets:

Sun in aspect with the Moon: A hard aspect between Sun and Moon usually registers as a strong awareness of differences between our mother and father, which then becomes the model for our later relationships.

In many cases this implies conflict or separateness between our parents, which conditioned our own response patterns in adult relationships.  In positive cases, this could suggest parents that worked consciously to honor their differences through mutual respect.

Mercury in aspect with the Moon: In a hard aspect, the flow of emotion tends to be interrupted by thoughts and speech.  Someone with a Mercury-Moon aspect may be able to talk about their emotions without necessary feeling them.

Depending on what kind of communication was predominant in the early home, there could be a pattern of doubt, anxiety or self-criticism within one’s subconscious that tends to come out during times of stress.

Venus in aspect with the Moon: Positive social experience tends to be remembered.  The childhood emotions from being adored and appreciated by other people are accumulated to form a positive social expectation.

When combined with a more difficult Lunar aspect, someone with a Venus-Moon aspect may try to alleviate his/her inner insecurity through seeking popularity and approval from others.

Mars in aspect with the Moon: Display of anger, physical exertion or self assertion from others make a lasting impression.  As a result someone with a Mars-Moon combination may respond to life with a proactive, courageous, or confrontational attitude.  If Mars is under stress, the anger could turn inward and be directed toward the self.

Jupiter in aspect with the Moon: Emotions of being rewarded, recognized, or succeeding tend to be strong in this combination.  As a result, someone with Jupiter-Moon aspect may respond to life with a sense of enthusiasm and optimism, if not entitlement.  In hard aspect, pride is high.

Saturn in aspect with the Moon: This combination tends to store memories of having to delay emotional gratification, as well as having to override one’s feelings for the sake of responsibility.  Someone with a Saturn-Moon aspect may respond to life challenges with a sense of duty and ambition.

Uranus in aspect with the Moon: In hard aspects, intense or traumatic experiences tend to be remembered.  There may be a sense of being different from others in some way.  Those with a Uranus-Moon aspect may respond to life challenges with highly charged emotions.

Neptune in aspect with the Moon: dreams and fantasy tend to be remembered, perhaps more than reality.  There may have been a need to escape into the world of imagination in order to cope with a painful situation in reality.

Someone with a Neptune-Moon aspect might respond to life challenges with a heightened sense of imagination and inspiration.  Some may continue the escapist patterns from childhood through various addictive behaviors.

Pluto in aspect with the Moon: Emotions of rage, manipulation, hate or coercion tend to be remembered.  In a case of hard aspect, the mother or other female figures may have been controlling, smothering and/or competitive.

Someone with a Pluto-Moon aspect may respond to life challenges with unusually deep insight about human nature, while others may choose to repeat the patterns of manipulation and control.

Natal aspects to the Moon tend to affect what kind of emotional experiences we tend to remember most.  By understanding which planetary archetype strongly impacted our emotional memory (i.e. the Moon), we can begin to release emotional tendencies that are less constructive.

What does your natal Moon placement say about your emotional patterns?  Please feel free to share your experience through email or comment.