You are here:Home Archives for Aspects

Sun Pluto Aspect: The Power to Make a Difference

“There’s a blanket over your hand grenade.”

What does Sun Pluto aspect’s “explosive potential” look like and what is the “blanket” that’s hiding it?

Better yet, how do you “take off the blanket?”

Jupiter is the part of you that seeks rewarding experiences.  Whether on a physical, mental or spiritual level, Jupiter’s directive is to “find what you enjoy doing, and do a lot more of it!”

Saturn represents the part of your psyche that focuses on essential necessities.  Whether in work, health or relationships, Saturn asks “what must I do to build lasting security?”

If Jupiter and Saturn form a dynamic aspect (conjunction, square or opposition) in your natal chart, you will be strongly influenced by the blend of these two contrasting energies.  Here are some possible expressions of the Jupiter Saturn aspect: END_OF_DOCUMENT_TOKEN_TO_BE_REPLACED

Venus is the part of you that bonds with others through attraction and trust.  Uranus intensifies what it touches, and gives it your unique personality.

If Venus and Uranus form an aspect (especially conjunction, square or opposition) in your horoscope, your social and relationship needs become intensified in a unique way.

Here are some of the possible ways a Venus Uranus aspect can express its energy in your life:

Since Uranus supercharges Venus’ social needs, you may feel an intense need to connect with others.  As Uranus is the desire for experimentation, you may also feel hungry for excitement and novelty within your relationships.

This suggests that you may be eager to form new, interesting relationships, and might feel stagnant if there isn’t enough action taking place within your social spheres.

END_OF_DOCUMENT_TOKEN_TO_BE_REPLACED

Moon represents instincts and emotions.  Neptune refines everything it touches. When Moon and Neptune form an aspect, your emotional receptors become much more refined and sensitive compared to others.

Here we’ll explore the various potential of Moon Neptune aspect and how to channel its sensitivity in a constructive way:

Refined sensitivity can be either ecstatic or painful.  Having a natal Moon Neptune aspect usually means magnified feeling sensations.

Your feeling of love can be felt as a blissful, swooning infatuation.  On the other hand, the pain of abandonment can be devastating.  Happiness is experienced as pure joy, whereas depression can be crushing.

Unless grounded by other factors (earth, Saturn) in your horoscope, such sensitivity can easily turn into vulnerability.

Growing up with special sensitivity isn’t easy, for others may label you oversensitive.  Exposure to harshness or abandonment can shock your psyche into numbness.

Being numb is a defense mechanism, and many Neptunians actually choose to be numb in order to avoid experiencing the intensity of their emotional pain.  Escapism, then, becomes the norm.

While escapism is a common reaction to the overwhelming sensitivity of Moon Neptune aspect, there is an alternative: To choose to be alive by feeling everything.

Fully feeling your emotions takes courage, especially if you have the sensitivity of a Moon Neptune aspect.  However, actually feeling the pain of disappointment, sadness or separation will be healing to your sensitivity.

By opening yourself to accept the painful emotions, you’re also opening to the joyful emotions within.  When you choose to feel instead of escape, numbness gradually fades, and the feeling of joy returns.

When you have the courage to feel, your sensitivity will allow you to see things more clearly, rather than less.  Your imagination turns into vision, aided by your intuitive understanding of all things.

Conclusion: Managing (and Embracing) Your Sensitivity

Rich, colorful emotions.  Moon Neptune aspect reflects a poet’s sensitivity and imagination.  When balanced by other parts of your psyche, it becomes a unique asset.

Managing the strong sensitivity isn’t always easy, especially if you’ve had a rough upbringing with unstable emotional foundation.  Like most Moon related tension in the horoscope, the answer lies in fully feeling the emotions rather than avoid them.

Do you have a natal Moon Neptune aspect?  How do you experience it’s strengths and challenges?  Feel free to share your thoughts and experience in the comment section.

In astrology, Mars represents how you need to act in order to be effective.  Your Mars reveals the style that best suits you in achieving your goals.  If you’re a fighter (just to give you a metaphor), then your Mars determines your fighting style (e.g. frontal assault or psychological tactics.)

Jupiter represents enthusiasm, expansion and reward.  Mythologically, Jupiter is the king among gods.  In your psyche, it’s the part of you that is bold, proud and unafraid to be in the spotlight.

If your Jupiter forms an aspect with Mars (especially conjunction, square or opposition), then you need to act boldly and enthusiastically, while constantly expanding into new fields.

HOW TO REALIZE THE POTENTIAL OF MARS JUPITER ASPECT

END_OF_DOCUMENT_TOKEN_TO_BE_REPLACED

MERCURY IS HOW YOU NEED TO THINK

Mercury rules ideas, communication and information.  Mercury isn’t necessarily “the way you think and talk”, but its position and aspect in your natal chart suggests how you need to think and communicate in order to be effective.

Aspects to Mercury can modify what your mind needs in order to feel confident (e.g. Saturn aspecting Mercury suggests a need for practical, structured thought).  No planet is inherently negative or positive, so it helps to explore both possibilities when looking at your Mercury aspect.

Uranus rules technology, revolution and humanitarian movement.  Uranus is a symbol of future unfolding in front of us.

Uranus disrupts the stagnant status quo by encouraging progress.  When your planet is touched by Uranus, it tends to become highly active (‘electrified’) within your psyche.

What happens when Mercury and Uranus meet?

Mercury is naturally curious and enjoys new information, but Uranus brings its tendency to a new level.  Uranus conjunct, square or opposite Mercury fires up the mind’s drive for learning and discovering novel ideas.

At the positive end of the spectrum, Mercury Uranus aspect can suggest that you have the mind of an inspired scientist that loves experimenting with new ideas and come up with new ways of doing things.

The tendency to experiment with new ideas can be applied to any field.  Here are some examples: END_OF_DOCUMENT_TOKEN_TO_BE_REPLACED

This article is relevant if you have a natal Moon Pluto aspect, or are going through a transit Pluto Moon aspect. It’s also for mothers who have a child with natal Moon Pluto conjunction, square or opposition. 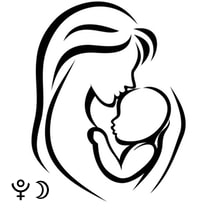 If your natal Moon conjuncts, squares or opposes Pluto, then Plutonian qualities will enter into your lunar bonds (e.g. your relationship with your parents, spouse and children). Let’s look at a few examples, both positive and negative, of how this can look like in a mother-child relationship:

Pluto’s lesson is in learning how to wield power and influence over others. During childhood, this lesson often involves seeing a shadow form (a negative expression) of the use of power in your parents (the mother in this case).

A Moon Pluto aspect may suggest that your mother was very controlling, and didn’t honor your emotional needs. The control could have been overt (e.g. a dominant, smothering mother), or subtle (e.g. control through guilt or manipulation).

Growing up with such a mother could be taxing for your confidence, as you may feel powerless against her will.

If this applies to you, it’s possible that your mother still wields a great deal of power over you. Then your lesson might be to start honoring your own emotional needs, despite how your mother may react.

However, it’s important to note that not all Plutonian mothers are like this.

There are many mothers who embody positive Plutonian qualities, such as self awareness and psychological insights.

These mothers learned how to wield their own power without having to control others. They influence their children through sharing of knowledge and insights, rather than through criticism.

If this describes your mother, then you’ve seen the positive potential of your Moon Pluto aspect.

When someone with a powerful Moon walks into a room, it changes the mood of everyone. This dynamic works in both directions (positive and uplifting, or tense and depressing). If you have Moon conjunct, square or opposition Pluto, you have the potential to wield this kind of emotional influence. The question is, how consciously will you be able to use it? END_OF_DOCUMENT_TOKEN_TO_BE_REPLACED

MASTERING THE POWER OF FOCUS


If Sun and Saturn form a hard aspect in your horoscope, Saturn (work, achievement) is inexorably tied to your life purpose (Sun). This means you’re here to develop Saturnian qualities such as self-discipline, integrity and focus in order to accomplish your goals.

Sun is Life Energy, and Saturn is Focus (which is a flip side of Saturn’s keyword ‘limitation’).  Your power comes from focusing your energy toward a goal, or purpose.

With those who have a natal Sun Saturn aspect, there seems to be an instinctive understanding that anything worth accomplishing in life takes focused effort. Even from a young age, you may see these people display serious ability to concentrate once they find something to fascinate them. END_OF_DOCUMENT_TOKEN_TO_BE_REPLACED

In astrology, Sun symbolizes your life direction – its placement suggests which way your journey toward self-actualization is likely to take you.

Neptune opens your awareness to creative vision and social/spiritual ideals.  A strong Neptune in a horoscope often suggests an ability to “see” goals or solutions with vivid clarity – it’s a bit like having a second sight.

If Sun and Neptune form an aspect in your chart, your self-expression and life goals must include creativity and vision for you to find fulfillment.  However, this is not to say it’ll happen naturally – like any solar journey, there will be challenges and pitfalls along the way before you reach your potential.

INCREASED SENSITIVITY: A GIFT AND A CHALLENGE