You are here:Home Uncategorized Aries Point in Astrology: Potential for Public Recognition

The Meaning of Aries Point in Your Natal Chart

Aries Point in your natal chart reveals the potential for how you might become recognized in the world.  While this does not necessarily mean you become a celebrity, expressing your strengths and talents through the Aries Point can lead to a solid reputation in your career field among your peers, clients and fans.

What is an Aries Point? 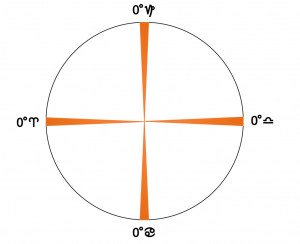 Aries Point refers to the 0 degree of Cardinal Signs: 0 Aries, 0 Cancer, 0 Libra, and 0 Capricorn. Using a 2 degree orb, we can include 28-29 degrees of Mutable signs (Gemini, Virgo, Sagittarius, Pisces) as well as up to 2 degrees of Cardinal signs.

The Sun is at an Aries Point at the beginning of each new season (i.e. Spring equinox, Summer solstice, Autumnal equinox, Winter solstice.) True to this symbolism of ushering in of the new season, Aries Point is associated with creating visible changes in the outer world.  Thus your Aries Point measurements suggest how you can impact (or become known in) the larger world using the quality of the planet or midpoint placed there.

Natal planets and midpoints on your Aries Point can become your “signature” quality.   The public or the people around you may come to know you by the quality of your natal Aries Point planets.

Examples of Natal Planet or Midpoint on Aries Point

Oprah Winfrey’s Sagittarius Ascendant is on the AP: She is loved by the public for her authentic persona (Asc), and her opinions and endorsements (Sagittarius trademark) influence the thoughts of millions of people.

In addition, Oprah has her Saturn/Pluto midpoint on the AP: This placement was called “having a skeleton in the family closet” by Noel Tyl, suggesting likely difficulty within the early home.  This description certainly applies to Oprah, who is known for her history as a sexual abuse victim.  On the other hand, Saturn/Pluto midpoint also suggests power and influence.

What If I Don’t Have any Planet on the Aries Point?

To give a few examples, Sun/Moon midpoint located on the AP suggests a potential for deep creative fulfillment through public expression – thus it’s often found on the horoscope of people that speak in front of people.  Mercury/Jupiter midpoint on the AP may suggest rewarding communication on a public scale, suggesting a possible career as a writer or otherwise successful communicator in the chosen field.

Even though Aries Point planets or midpoints do not guarantee an outsized success by themselves, it may be helpful to see them as your potential to impact, and be recognized by, the larger world through your gift.

What planets or midpoints do you have on the Aries Point?  Does it reflect how the world (i.e. other people) recognizes you?  Can you project the quality more consciously?